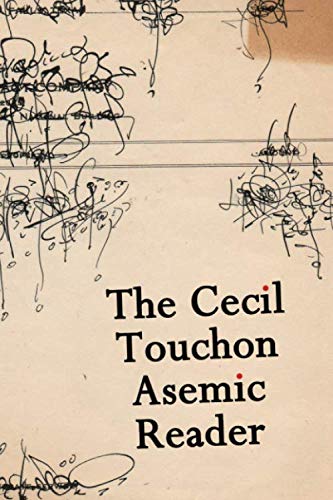 Reseña del editor The current permutation of The Reader, originally envisioned as a black and white book, expanded in size and breadth to its current full color version to take into account the range of expression in Touchon's asemic explorations spanning forty years of works on paper including images from Touchon's unpublished sketchbooks. The first section of the book primarily contains palimpsest based asemic writing originally intended for mail art correspondence in which Touchon overwrites texts as found in 19th and early 20th century antique poetry books, a book of sermons, farm journal pages, a postcard, a grade school autograph book page, a sheet of music, a page from a vintage high school chemistry workbook and old invoices. Using these found papers collected for possible collage material, Touchon retains and uses the structure on the page and the patinated paper as inspiration for these asemic works often overwritten with india ink and quill pen. Following these are selected typographic abstraction works from the Fusion Series, Touchon diary-like ongoing series of collage works begun in 1983 and continuing to the present. In these works Touchon uses a wide ranging body of materials, approaches and techniques to produce these poetic works that explore figure and ground relationships and a variety of compositional strategies. These collages become studies for Touchon's paintings. In the midst of this group are a series of asemic 'songs' on torn brown paper using colored pens, pencil shading and white pencil highlighting that express the idea of visual musicality. At the end of the typographic collage works there is the image of a labyrinthian network of overlapping white lines over a black void that seem to float on multiple levels. This opens the way to a set of works of brush and ink from 2009 on the pages of a single antique journal where the markings are painted onto the leaves of paper and after a few moments the pages were held under running water in the kitchen sink. Whatever ink had dried remained on the page leaving gray ghost marks where the ink had been washed away. The book concludes with a variety of works from the late 1970's examining Touchon's early mark making based on language or visual musicality.Taken as a whole, this sampling of works across forty years of Touchon's oeuvre reminds one of a quote from the 1949 'Lecture on Nothing' by John Cage: ""I have nothing to say and I am saying it..."" but in Touchon's case he possibly is saying nothing about Something; perhaps a something so transcendent that common words cannot speak of it, something so vast that words crumble into gibberish and collapse into an unutterable silence. Some of the titles of previous exhibitions of Touchon's work suggest this such as: 'Beyond Words', 'Reduced to Silence' or 'The Unspoken Remains'. Yet Touchon's works are not nihilistic in nature. They could be said to be meaningless though clearly not purposeless. Touchon has said that his interest is in expressing 'the underlying universal harmony of all things'. One has the impression when studying these works that literary meaning has been removed or obfuscated but in Touchon's view he sees his work as liberating language from its work as bearer of meaning and by extension liberating the reader from the work of deciphering meaning and from the obligation of being literate when enjoying the works purely for their aesthetic value. In a world whose population is engulfed in a deluge of information that we must continually navigate, these works offer a small oasis in which one might be refreshed along the seemingly endless journey over the shifting sands of data on the horizons of which can only be seen mirage and simulacrum.