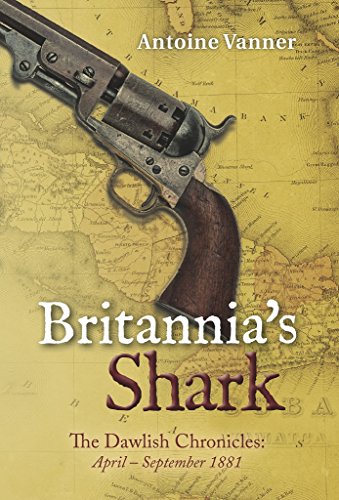 Sea adventures in the Victorian Era

This is the third volume of the Dawlish Chronicles naval fiction series – action and adventure set in the age of transition from sail to steam in the later 19th Century.

But now a group of revolutionaries threaten that power’s economic basis. Their weapon is the invention of a naïve genius, their sense of grievance is implacable and their leader is already proven in the crucible of war. Protected by powerful political and business interests, conventional British military or naval power cannot touch them.

A daring act of piracy drags the ambitious British naval officer, Nicholas Dawlish, into this deadly maelstrom. Drawn in too is his wife Florence, for whom a glimpse of a half-forgotten face evokes memories of earlier tragedy. For both a nightmare lies ahead, made worse by a weakness Dawlish never suspected he had. Amid the wealth and squalor of America’s Gilded Age, and on a fever-ridden island ruled by savage tyranny, and manipulated ruthlessly from London by the shadowy Admiral Topcliffe, Nicholas and Florence Dawlish must make very strange alliances if they are to survive – and prevail.

Britannia’s Shark continues not just Nicholas Dawlish’s story but that of his courageous and resourceful wife Florence. He fell in love with her in Britannia’s Wolf and he has risked social ostracism and career limitation by marrying her. Now, faced with challenges that threaten to overwhelm him, he is more dependent on her than on any other. Daring and initiative have already bought him rapid advancement in the Royal Navy and he has hungered for more – but can the price be too high, not just for himself but for Florence too?

Britannia’s Shark is more than a naval thriller or a tale of war and military conflict. Revolutionary forces that will ultimately destroy the comfortable assumptions of the late-nineteenth century are already stirring and a lethal new technology which will be crucial in both World Wars is being born. Key roles are played in this tale of action and adventure by two real-life characters. John Phillip Holland, is obsessed with creation of a functional submarine and is prepared to look anywhere for the funding to make his dream reality. (“From his cheap dark suit Dawlish might have judged him a clerk – or a schoolteacher – had not the intense eyes behind thick, rimless lenses caught his attention.”) And Adam Worth, alias Henry Raymond, real-life model of Sherlock Holmes’ fictional adversary Professor Moriarity, is prepared to facilitate Dawlish’s efforts, though at a surprising price.

The Dawlish Chronicles move naval fiction forward from the Age of Fighting Sail to the new world of steam, breech-loaders and torpedoes As a boy in the late 1850s Nicholas Dawlish joined a navy still commanded by veterans of the Napoleonic Wars, men familiar with sails, carronades and broadsides. But now, in the early 1880s sail is yielding to steam, new technologies are creating new weapons and established international power-balances are shifting. Against the background of real historical events Dawlish has to confront challenges inconceivable to earlier generations of officers.

From a review in Quarterdeck Magazine, March-April 2015

“This historical spy thriller reveals attempts by the insurgents to design, build and operate the first submersible craft in a deadly underwater campaign, which thwarts the Royal Navy’s conventional capabilities….… pace is fast and furious, with plot twists and turns, as Dawlish tries to capture the prototype submarine and … as the plot turns to Cuba, the submarine ends up on a bay on the coast of Cuba in the middle of an insurrection against Spain. The author’s narrative of Yellow Fever and its affects are realistic and horrifying…”