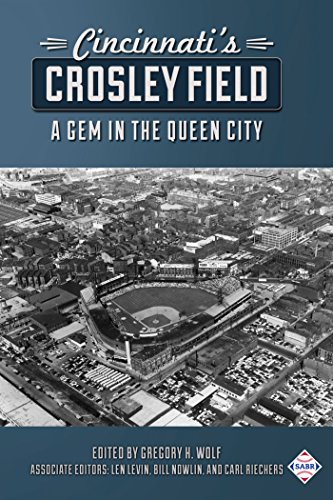 April 11, 1912, marked a new era in the history of the Cincinnati Reds. On that day the team inaugurated the season by playing its first game at Redland Field, which was renamed Crosley Field in 1934 in honor of the team’s owner, Powel Crosley. The new steel and concrete ballpark was located at the site of its predecessor, the outdated wooden Palace of the Fans at the intersection of Findlay Street and Western Avenue. For almost six decades, Crosley Field beckoned like a shining gem surrounded by warehouses and industrial complexes in the Queensgate neighborhood of the Queen City. The Reds closed the book on Crosley Field on June 24, 1970, and moved into Riverfront Stadium, a modern all-purpose sports venue that held almost twice as many spectators.

This book evokes memories of Crosley Field through detailed summaries of more than 85 historic and monumental games played there, and 10 insightful feature essays about the history of the ballpark. Former Reds players Johnny Edwards and Art Shamsky share their memories of the park in introductions.